So one of our fave phones (Ericsson T28) had a status LED on the front.

We just loved that & we wanted to do that with the Ringo. But all the LEDs are on the back & to duplicate the status LED from the old phone we needed it on the front.

So we added a 9th Neopixel to the front of the phone. we stuck it next to the speaker. We used super-teeny patch wire (for like pcb rework etc) & grabbed DOUT and VLED from D8.1, and the nearest convenient ground.

Made the changes in MAKERphone.h to initialize FastLed for 9 LEDs and did up an example sketch in Arduino. (We included the splashscreen in the sketch to test the PWM frequency fix).

So when we do finally start messing with the actual firmware, we have the hardware already in place & will have our status LED! 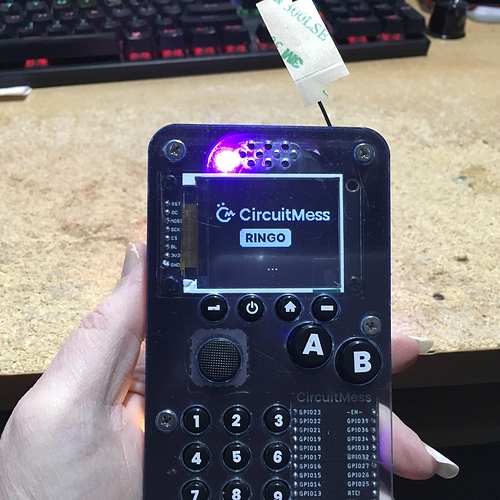 This is awesome, well done