Does anyone know how to program the MAKERbuino so that a PC would recognise it as a gamepad?

I don’t think this is possible because the Makerbuino uses the ATmega328 microcontroller, this doesn’t support a direct link to the PC via USB. (The Makerbuino is basically an Arduino Uno without the interface chip).

I’ve not done this myself, But It is how ever possible using an Arduino Leonardo board, as this board can be setup to emulate a USB keyboard or mouse.
You could use the Makerbuino to send the commands to the Leonardo board, to which this would control your PC.

You could search on the Arduino.cc website for the information
This website which also explains how this can be done too.
http://www.instructables.com/id/Arduino-LeonardoMicro-as-Game-ControllerJoystick/

There seems to be a way to program an Arduino UNO to identify as a keyboard device: 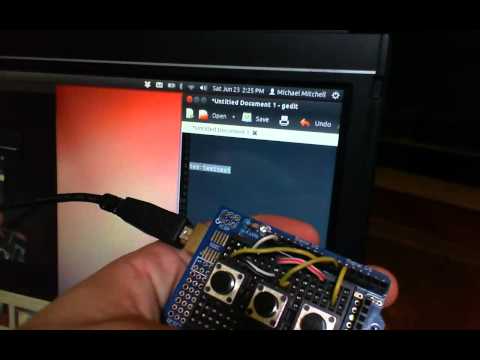 134 Turn your Arduino UNO into a USB HID keyboard, and make buttons that do whatever you want. Make it a useful tool, with new buttons for Cut/Copy/Paste or Volume+/Volume-/Mute, or annoy your friends and colleagues by setting the keyboard to perform...

However, the MAKERbuino seems to differ from the Arduino UNO as it does not have the Atmega8U2 chip. So I guess I’m out of luck…

There’s a workaround, since there is an I2C port. You need to design another board which will make the transition between I2C and USB. That’s a nice little project to do. Maybe I will someday.

That’s not a bad project actually @Tom?. Might have to fabricate a small board for an ATmega32u4 chip and connect it to the Makerbuino via I2C

stm32 are nice chips… but the reason I mentioned the ATmega32u4 is that the Arduino community uses it, it has a USB transceiver, so would work for the makerbuino I2C… Anyway I prefer PIC…

Greetings, I know this is an old topic, but what do you think about this? Would this work? https://www.youtube.com/watch?v=GrO8ZmxbOyI&list=WL&index=5&t=0s
https://code.google.com/archive/p/unojoy/

Hey, thank you for joining the topic!

I don’t think this would work as the UNO is using a different USB-TTL chip compared to MAKERbuino.

The reason behind that is that UNO’s USB-TTL converter can be reflashed with Unojoy’s custom firmware whilst MAKERbuino’s chip cannot be reflashed (it’s not a programmable microcontroller).