Is there a Ringo emulator similar to the MAKERbuino one I can use to program and test apps before I receive my unit?

Unfortunately not, but we’re looking into making this in the future and even implementing it in CircuitBlocks. Although, it’s not as easy as it sounds

If your Chromebook supports Linux apps (Crostini) you can probably install the 64 bit package (.deb) and compile the firmware or apps, but you will probably need to sync those files out to the host ChromeOS and flash them with another tool like Chromeduino or AVRChick or similar.

Crouton is another option but it requires your Chromebook to be in Developer Mode which isn’t always possible if your Chromebook is managed by an organization or school.

Did you do something like that in the past? Is Chrome OS really the operating system of choice for projects like that? It seems that there are a lot of things that might not work properly there.

Yeah, I tend to use my Chromebook for almost everything that I would have used a Linux machine for a few years ago.

Google supports Android Studio run inside the Linux apps environment for developing Android applications and they are adding support for more USB devices to be able to communicate in and out of the Linux VM all the time.

I just found out this morning that I can access the GPG on my Yubikey on ChromeOS r81 which was really the last thing holding me back from switching over 100% of my development to my Chromebooks.

I’ll be testing this USB pass-through with various other microcontroller devices soon and I’ll put my MAKERphone at the top of the list.

Great to hear that, it’s been a rough ride for Chrome OS since they’re the newest around so it takes a bit of time to build the community and the whole system properly.

We’ll follow the progress of the Chrome OS and definitely plan to release any new software (and CB at some time) to this new OS as well.

Keep us updated on how the experiment is going!

Here are a couple screenshots showing the commands I used in the Crosh shell to attach the USB device into the default Termina VM and then showing on the right side the beginning and completion of a firmware update.

What these don’t show is the pain I ran into with some assumptions that were made in how the Arduino IDE got installed and how it has several paths that it might check nor how I had to monkey around with the cache in order to get it to download the 1.0.6 version of the Ringo files to get them to show as options and install Python 2.7 and python-serial (2.7 went end of life in January 2020) in order to allow the esptool to flash though it should work just fine with Python 3.x.

I don’t think any of the above issues were strictly limited to installing inside Crostini on a Chromebook, I think Debian and possibly Ubuntu would have the same issues. 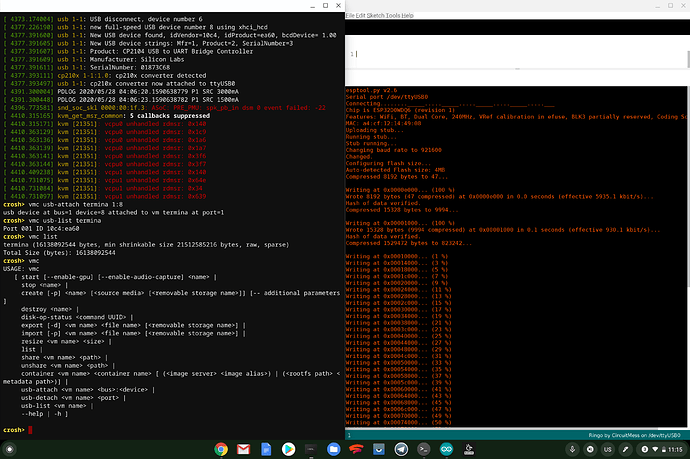 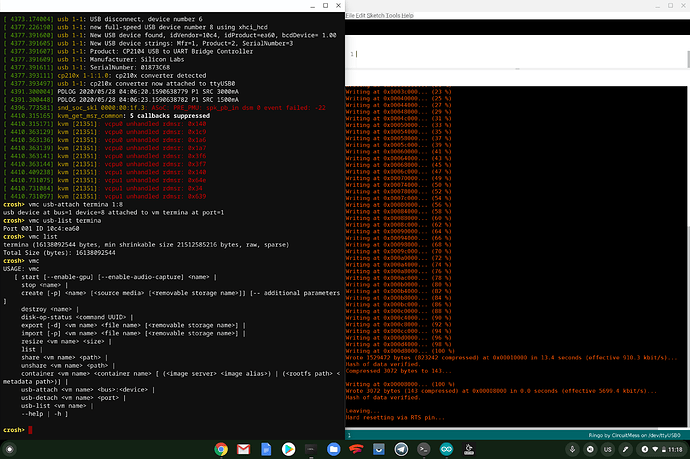 Wow, it seems like you really went through hell to get there.

I have to say bravo for your perseverance and effort to pull this through - hard work always pays off in the end!

Do you maybe have a little tutorial made so other Chrome OS users can also use this method?

So while I was able to install CircuitBlocks I haven’t had much luck using it to push code to the MAKERphone, but I just went through the steps to install it again on another Chromebook (which is not in Developer Mode so closer to what most students and non-power users will use) and I took some notes.

First off the installation of CircuitBlocks from the .deb package can be started from the Files app and doesn’t take long, but then when you first launch from the shortcut it tries to download the world (or at least the Arduino IDE and maybe some other things which take quite a long time with a spinner but no progress bar or status messages). 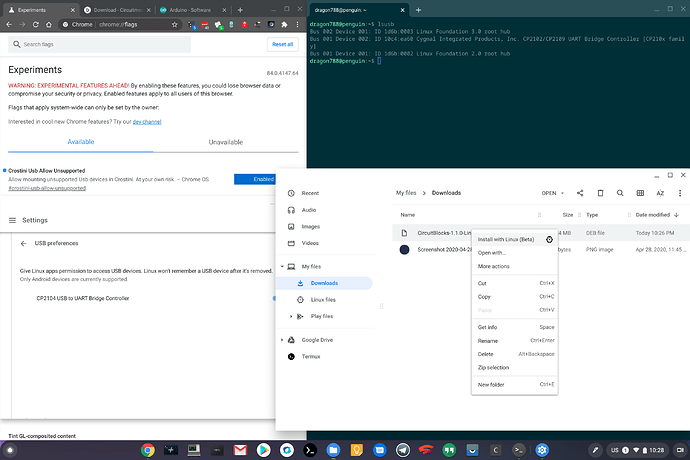 The first big issue I ran into was the files in ~/.arduino/arduino-1.X.XX/java/bin/ weren’t executable so launching Arduino IDE from the launcher just hung, but I had to try running arduino from the Terminal to be reminded about the java issue that I’d fixed previously. To fix it again I ran the command below which has a * in the middle so that it works for any version of arduino under ~/.arduino which in my case happened to be arduino-1.8.12.

After I got the IDE to open before I could do anything with the Ringo I had to set the Crostini USB Allow Unsupported flag to Enabled in chrome://flags and restart the Chromebook. When I plugged in the phone after the restart it prompted me whether I wanted to connect the device to Linux which I allowed.

Then I tried to “Burn Bootloader” from the Arduino IDE but I couldn’t actually run it because it didn’t have a port selected, and this was due to /dev/ttyUSB0 being owned by root:root (user/group) and even though the user inside Crostini is a member of dialout (historically used for serial devices/modems which is why so many IoT devices use converters that are recognized as ttyUSBx), I had to sudo chown root:dialout /dev/ttyUSB0 in order to actually see and select the port in the IDE.

Then running ‘Burn Bootloader’ failed because there was no python available. Initially I installed python-pip since that pulls in Python 2 and typically you need pip to get any additional Python packages. Then it complained about needing PySerial so I fixed that with pip install pyserial but then I realized since PySerial was the main thing it actually needed I could just install python-serial or python3-serial and skip doing installs through multiple package managers (apt and pip). I verified that once I had a python in the PATH I was able to reflash no problem (though for Python3 I had to symlink it to /usr/bin/python since Arduino is hardcoded to look for just python and not python3).

I made sure Python3 worked because it is strongly preferred for any new code or installations since Python2 is no longer supported by the Python Software Foundation (and Python 3.x has been around forever). The steps below should get things in order from the Python side of things.

Very impressive and you really went a long way to get this working.

Can we use your instructions and images to create a little ‘advanced tutorial’ that we would publish in the “Creations” section on our website? Of course, you would get full credit as the author and we would link it here to the forum.

Sure! I also noticed it appears you are using fpm to build the Debian package, maybe adding python-serial as an explicit dependency would help as that would pull in Python and pyserial.

We’ll look into that! Thanks