I have been working on the “tricorder ‘project’” for the past few months.
It’s not for a submission. It was an accident actually.
I have also been working with radio. CB Am radio works with sound not power.
It seemed like a good idea to send sensor data over radio because it’s ‘free’.
Then came something like a communicator and so on my projects started getting complicated and evolving into other work.

I developed this scanner in secret until Beta. The Alpha 1.1 scanner used three lights, two piezos, and two ferrite coils. I developed something similar to my solar meter, but less complicated and better looking. The theory comes mostly from the interpretation of the 555 timer in series with a coil. The coil turns produced “frequency”, while the amount of power also created a field. This magnetic field was stabilized using classified means. Both scanners are essentially useless while destabilized. I have now built a third scanner using TTL. Since the Alpha 2.1 is in testing, I feel no reason to conceal an inferior model. Let me walk you through the Beta Science Scanner by Serbots Labs as it includes an entirely new concept in scanning that may change your life (not guaranteed).
This is the Beta Scanner breadboard style. 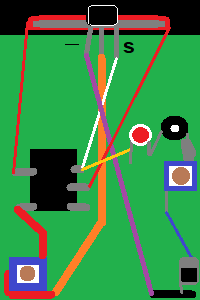 Note that the Signal is connected to output, not trigger. That is because we want a secondary input separate from our coil.

While searching the intorwebz for scanning equiptments, I came across this strange module. Magnet. The “Hall Effect Magnetic Sensor”. That was hard to swallow, because I ignored it for about two weeks.
Suddenly, I realized what was going on. The back of my mind was screaming. Magnet.
Something of design clicked when I thought of experimenting with the HEM Sensor.
I had one for no reason now.
I had finished all I could test with my Alpha model. It seemed less than primitive. It felt incomplete.

The overall use is not to scan for ‘what’, but simply ‘for’. I had high standards for this scanner. It was going to make all the difference. Maybe that’s why I’m cautious about this new model.
It’s a simple True or False based logic scanner. You scan RF, metal, people, other magnetically receptive matter, and it tells you if it’s there. The two knobs adjust your scan. You must meticulously and scrupulously wind the telephone line to make a call. You don’t simply scan. The operator would calibrate it to the specific signature…and guess what? It runs two machines at once. The combination of the individual module and the timer means you must power two machines. You must re-calibrate at every runtime.

So enjoy the mess I made here. I think it’s brilliant whenever I append this nonsense. I didn’t even know what the 555 timer was before this year.

My OP for this science project.