I live out in the country, and I was having really poor connection in my house (0-3 strength). I was troubleshooting that, and all of a sudden, after airplane mode was toggled on then off, the connection jumped to the 13-15 range! The strength continued to fluctuate in that region, no matter where I went in the house. After each following reset, it came back down to the low strength, while after each airplane mode toggle, the strong signal came back. This worked without fail the numerous times I tried it.

Here’s a map of the cell towers near me. I live in the red circle. My hypothesis is that ringo was connecting to the lower 2 towers (green circles) instead of the closer tower on the left (blue) with each reset. With each airplane mode toggle, it somehow found the stronger tower and stuck with it until the next reset. 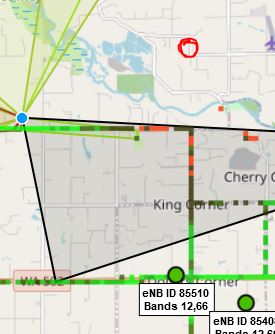 I hope this helps anyone having connection issues. If anyone has any thoughts, fell free to contribute.

It’s still a bit of an enigma how do these cell towers work, so any new input is good for everyone on this forum!