Cant get screen to work

Hi, I’ve got to the point in the instructions to test the chip and screen. I turn the power switch on and get nothing. I have been round and checked all the solder and can’t see any problems. I have put a multimeter across the battery terminals and there is power there. I would just like some advice as to what points to check on the circuit board to get to the route of the problem? It’s worthwhile mentioning that there was one of the 22 ceradicate capacitorso missing from the kitchen. I bought a replacement but got a 22j by mistake but was told that shouldn’t make any difference? 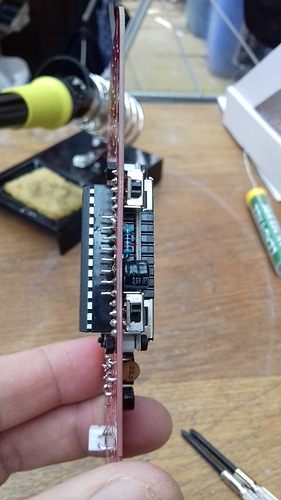 That should say 22 ceramic capacitor missing from the box! Predictive text!!!

The 22j capacitor will work fine(the j denotes its tolerance as being ± 5%, it’s still more or less 22). Can you take some clear pictures of the front and back without the screen connected so we can see the components and their connections, please?

My first possible guess(I can’t tell from the side-on picture) is that maybe the 2 electrolytic capacitors are facing the wrong way, they’re polarized(unlike the ceramic ones) which means the thick white line running down the side needs to be facing towards the screen.

The capacitors are definitely facing the right way. Here’s some photos of the build so far. 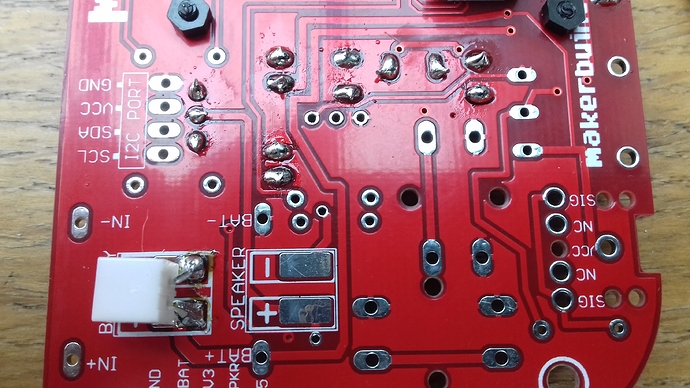 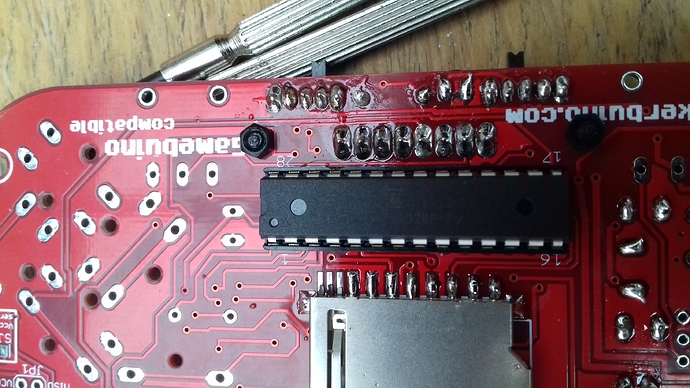 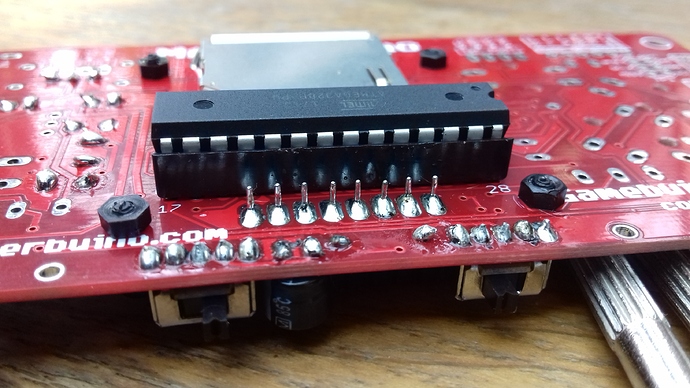 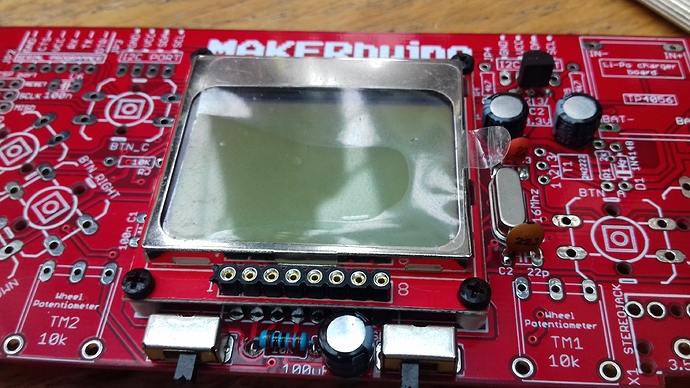 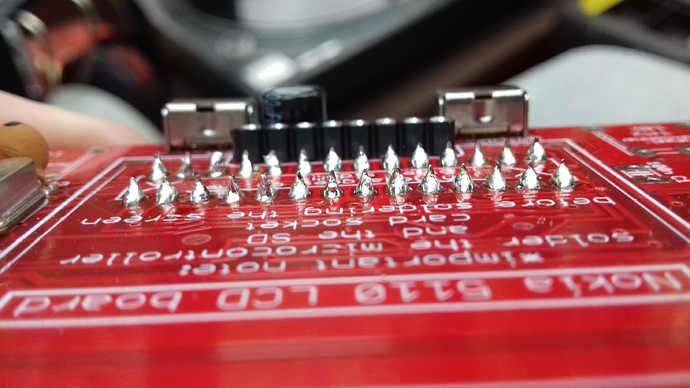 I’m getting readings from the multimeter across all 3 electronic capacitors.

I’ve got the screen now to light up by jumping a stage ahead and turning the contrast up on the potentiometer. Nothing is on the screen though. Looking at the other forum posts they seem to suggest this is a blank microcontroller?

If the contrast is working then you’re probably correct in it being a black microcontroller, it could also be the zebra strip in the screen being defective and/or not making proper contact but it sounds like it’s working fine, @albertgajsak should be able to assist you with that. It might also be a good idea to send them an email at contact@makerbuino.com as they will need your backer number/ personal details to send any replacement parts out to you.

Thanks, have emailed am awaiting a response.

Hi there!
I’m new here, but I had exactly the same problem and maybe I’m able to help you:
I solved the problem by using an ordinary Arduino as a programmer; you have to burn the makerbuino/gamebuino bootloader to your new chip. You can easyly find the bootloader at Google and I found an instruction for flashing the bootloader on the gamebuino site.

Hey folks, an update on this:
I’ve spoken with @Steve via email and have shipped the replacement micro.
@Steve, as I said in the mail, I am really sorry for the inconvenience, there were 30 kits sent out with blank micros two months ago due to a manufacturing mistake, you can read more about it here:

I posted a picture in the introductuion area

@magnetto, congratulations on heroically fixing the problem by burning the bootloader on your micro (a.k.a. doing our job), you’ve just earned a couple of badges

@Dalemaunder, thank you for directing @Steve to the email address, I’ve been only handling email requests lately due to a very high demand of kits

@August_Hilliger, I’ve sent you a private message and tagged you in a public post asking for photos of your device’s front and back side. Please send the photos via PM, I can’t help you without them. We do not know whether you have the exact same problem and I think you do not have a problem with the micro as your kit was not from the faulty 30-kit series