I have finally started the MAKERbuino kit my friend got me 3 years ago, it’s an original kitckstarter model.

Basically I’m having trouble with the first functionality test.

So far I’ve found the instructions to be wonderfully clear, I haven’t done much soldering before but recently finished a smaller project which had some pretty bad soldering joints but worked okay in the end. With this project however, I think my soldering has been pretty good!

EDIT - So I just checked the battery, and it’s perfectly fine, with enough charge. Evidently something has gone wrong.

EDIT - Also to confirm, I’ve double checked and I’ve definitely put the voltage regulator and the 2n2222 transistor in the correct place. I’m also using the correct 22pF capacitors near the crystal.

EDIT - I have also tried completing Step 13 suggested in this post but still can’t see the settings screen.

Looking at your picture I don’t see the resistor soldered on R3? Which was something I pointed out in step 13?

Hello, I took that picture before I found your solution, I’ve now added the resistor in step 13, but it’s still not working unfortunately.

Since I have one of the older versions that has a socketed screen, I decided to go ahead with the build. Someone on another thread said their contrast started so low they couldn’t see anything, and managed to adjust it with the buttons when they finished everything.

I have good and bad news! The backlight is working but still nothing on the screen, I’ve tried pushing left and right and a number of buttons to get a reaction out of it, but no contrast adjustments or sound was heard. Any more ideas?

P.S. I have had great fun constructing this so far! I’m messing around with the HTML emulator while my device isn’t fully functional. 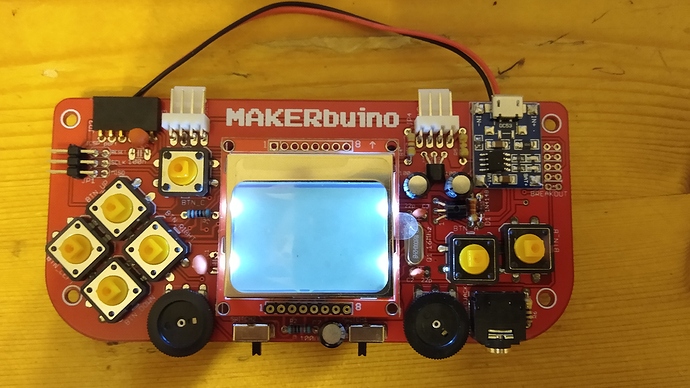 Thank you for supporting MAKERbuino and I am sorry to hear that your device is not working.

Can you please send us a few photos of your device’s front and back side via email to [email protected]?

No worries, I understand these things happen.