I ordered the multiplayer pack today and hate the clicking of the buttons that come with the kits. Anyone have a source for buttons that will take the caps inclided with the kit that won’t make me want to stab myself Every time I press one?

@Tom was able to find these buttons, they’re the same style but require much less force to press, I don’t know if they’re quieter than the ones that come with the kit though, I imagine they would be; He might be able to tell you if he sees this.

These are a variation of the same series of buttons. 100% compatible then, but half the force required to press them. They sound a little quiter as well.

Thanks for the replies, I saw that post before I posted. I want no noise I can’t stand clicking.

If you want no noise, like on a regular gamepad, you need modifications on the pcb. On gamepads, for each button you have a specific pattern, like this: 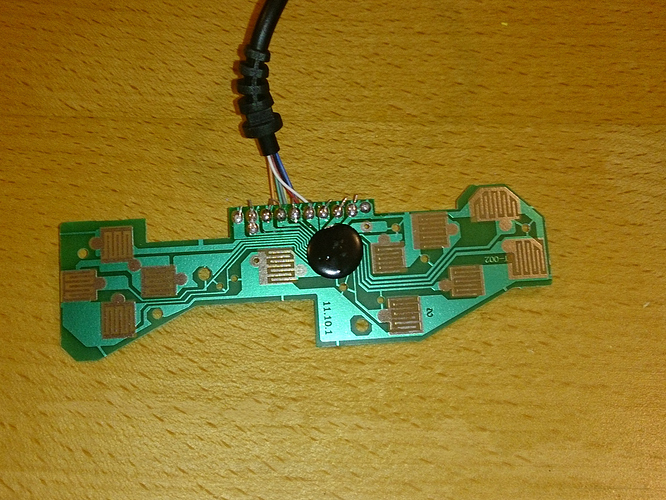 Then you have a silicon dome with a conductive plastic disc underneath to make contact.

If you’re wondering why I didn’t go with that solution (as well as a lot of other DIY kits and devices) - making a PCB pattern is not hard nor expensive, but the custom silicone buttons need to be made with a special mold that costs 2 - 4k€ to be made. Back when MAKERbuino was being developed, I didn’t have that money and I still think that making rubber non-clicky buttons is not something a lot of people are going to appreciate.

In fact, I’m getting more compliments than criticism in regards to button clickyness (not talking about you guys ranting in this thread

@Theholybull,
There are less clicky buttons that are compatible with the current MAKERbuino button caps, but I think that there is no model that is absolutely non-clicky.
Please don’t stab yourself, I’ll feel responsible for that

I definitely appreciate the clicky buttons but would much prefer one of the less clicky models, might be a good addition to the store if at all feasible.

Maybe it is worth exploring these.

Instead of the d-padsomething like this would be great: https://www.sparkfun.com/products/9426
I bought one someday, never used it. Maybe I’ll try to hack something for Makerbuino. When I’ll have time.