Only backlight turns on, but now the screen board doesn't work either

After reading a thread where someone had a similar problem where only the lights would turn on, I decided to de-solder the screen board, so that I could look at the joints I had done for the intergrated ciruit holder (someone had suggested this was the problem). After checking these, which were completely fine, I re-soldered the screen, however the lights now don’t turn on at all and the screen still doesn’t work. Here are the photos of the joints for the screen: 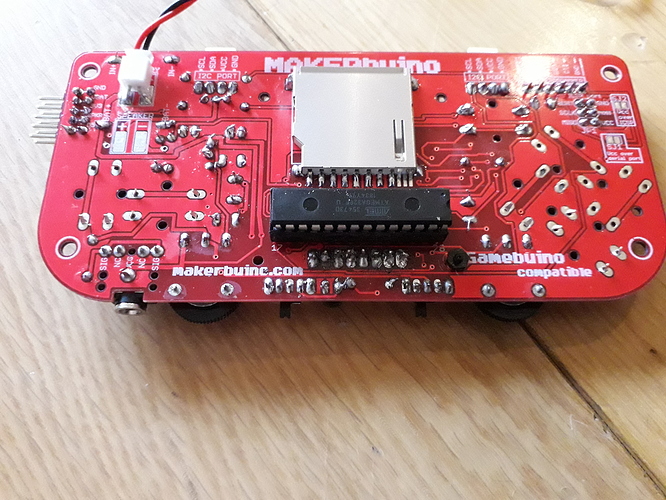 Thank you for supporting MAKERbuino and I am sorry for the problems that you’re experiencing.

You are putting way too much solder on your soldering joints. More importantly - there must be NO soldering bridges (the soldering joints must not be connected together with solder or the device will not work).

Please, go back to chapter #3 of the build guide (https://www.makerbuino.com/build-3/) and watch a couple of soldering tutorial videos.

Improve your joints a bit and return to me with a few better photos.

Thank you for the encouragement. I’m getting some wick, so I can hopefully test out the screen and re-solder it. I’ve only a little experience with soldering so I’m struggling on such a tight-fit board, thanks again.
Sloth

if you don’t manage to fix this yourself, you’ll simply send us the console and we’ll help you fix it!