I completed step 12, but failed to have anything show up on screen after connecting the battery and powering it on. Fortunately I have a multimeter available and with the help of this post I was able to narrow down what the likely issue is:

I wouldn’t complete the board at this stage, but it’s up to you?. I would be checking the powers and grounds on the microprocessor and screen. If that’s something you want to try then remove the microprocessor from the board and connect the battery, switch both switches to the left, so that the makerbuino is in a switched on state. Set you’re Multimeter and wires the same as before. Now check the microprocessor connector on the board, you need to check the voltage on these pins: Put the Mul…


The readings I get for pins 7 and 8, 22 and 21, and 22 and 20 are normal, but for 8 and 1 get nothing.
This lead me to assume there is perhaps an issue with the solder joint for the first pin on the socket, but no matter how much I try I cannot seem to successfully desolder the screen from the board to investigate. Also, embarrassingly, the space between the pins and the socket is really tight and I ended up melting the edge of the socket a bit although it looks like it’s probably just cosmetic.

Since it’s the first pin I can see it from the side and it looks ok, but I can’t really know for sure. 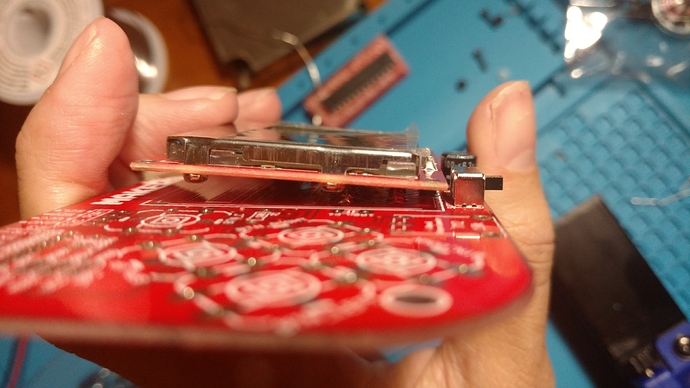 Additionally, here is a picture of the current state of my board if it’s of any help. As you can see, I’ve managed to remove most of the solder from the screen header pins, but not enough to facilitate it’s removal. I’m also a bit concerned that I appear to have damaged the boards coating a bit under the headers. I have no idea how big of an issue that might be. 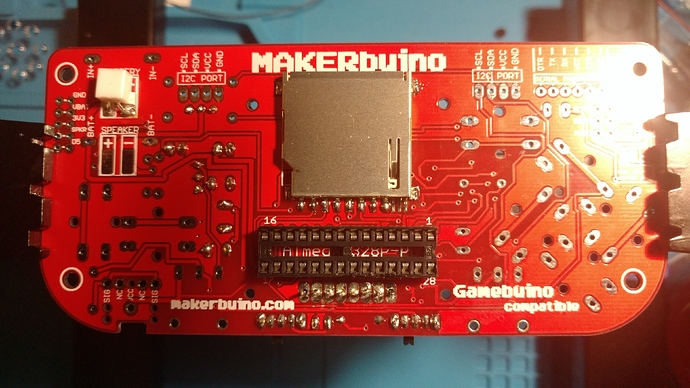 Does anyone have any advice about where to go from here? I’m afraid of causing permanent damage if I keep trying to get the screen off if I haven’t managed to do it already.

Thanks in advance for any help or advice! I really hope I can get this working!

Hi @Ferociousstrike, I was the one who posted that topic, its been a while since I’ve been here so I might be a little rusty on the topic.
It looks to me that you haven’t solder resistor R3 10k which connects to pin 1, (Step 13).
solder the resistor on the board first and retest… let us know

@bitfogav you are my hero! I soldered on that resistor then resoldered the screen properly and it powered on. Thank you so much! 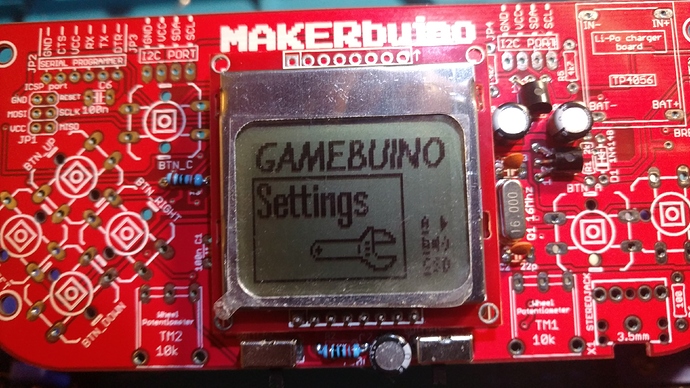 Nice work!!. Enjoy your makerbuino when you have finished it, mine gave me many hours of fun!

*If anyone would like to know the R3 resistor stops the atmel chip from being in a constant reset loop.

@bitfogav, thank you so much for helping out here, but I’m not completely sure how this helps the device work?

The RESET pin of every microcontroller should be internally pulled high and should only reset if you intentionally pull it low.

We’ve tested this on workshops and a huge amount of devices before and it was working.
In fact, we’ve been supporting our users for the last 18 months and I don’t think the resistor and the endless reset loop was ever an issue…

Additionally, I think this was caused by bad soldering joints on the microcontroller socket underneath the screen, not the lack of resistor.

Bad soldering joints underneath the socket is the most common problem users usually have while assembling their MAKRbuino.

The RESET pin of every microcontroller should be internally pulled high and should only reset if you intentionally pull it low.

The internal pull-up which is connected to the RESET pin is known as a “weak” pull-up resistor, and
in the real world especially ones with noisy environments can and will cause the “weak” pull-up to be insufficient.
This may explain why in certain environments this works fine, in others this doesn’t. (this is why the datasheet says to use an external pull-up).

There are also two other topics also indicating that they have the same issue when they are at step 12.

The screen didn't show anything Support

I tried following everything.I thought I did a good job but on step 12 my screen didn’t show anything. PLEASE HELP![IMG_1288]

Hi, my girlfriend bought me a Makerbuino for my birthday some time ago and I’ve finally got around to putting it together. I got up to step twelve but powering it on did absolutely nothing. Nothing on the display

Here’s the photos of the build [image] Any help much appreciated. My heart really sank when it didnt do anything. I checked the transistor & regulator locations and even tried charging the battery, but the switch had no effect